ECO2Reef Systems are designed to mimic natural marine ecosystems and store large amounts of carbon. By developing NEW Blue Carbon ecosystems like corals, mangroves, seagrass meadows and seaweeds in places where there is now only sand or mud, we can increase biodiversity and at the same time add to the world’s natural carbon sinks. That way we help nature store more of the excess carbon that humans have been and are still emitting into the atmosphere. If we do it well, we could store from 3,000- 4,000tCO2/km2/yr and increase total storage in biomass from 20,000-200,000tCO2/km2 creating new sources of food and income for coastal communities. In this blog, you can read how that works.

Natural carbon sinks and sources: the importance of Blue Carbon

Without doubt, anthropogenic carbon would have killed most of the life on Earth had it not been for natural carbon sinks. With unbreathable air and a super-hot climate, the 20th Century’s extinction rate would have been even greater than the Permian Triassic Extinction that exterminated about 75-80% of all species on Earth.

Natural carbon sinks are “storage tanks” for CO2 and other carbon compounds. Like all storage, contents can be added or removed. The graph below illustrates how natural carbon sinks have so far absorbed almost half of the CO2 emitted by humans since industrialisation. Without these sinks, atmospheric CO2 would now have been way beyond 500ppm (as compared to the actual 418ppm measured in 2021) and we would be heading towards temperature increases of 3 degrees or more with little or no chance of avoidance.

Oceans are by far the biggest sink (see figure below). Most CO2 is removed from the environment through photosynthesis and most of this occurs in the ocean. During the 20th Century, terrestrial forests and plankton in the open ocean were seen as the most important carbon sinks. More recent research is uncovering the enormous storage potential for organic carbon in shallow water ecosystems made up of seagrass, mangroves, and salt marshes. These ecosystems are called ‘Blue Carbon’. 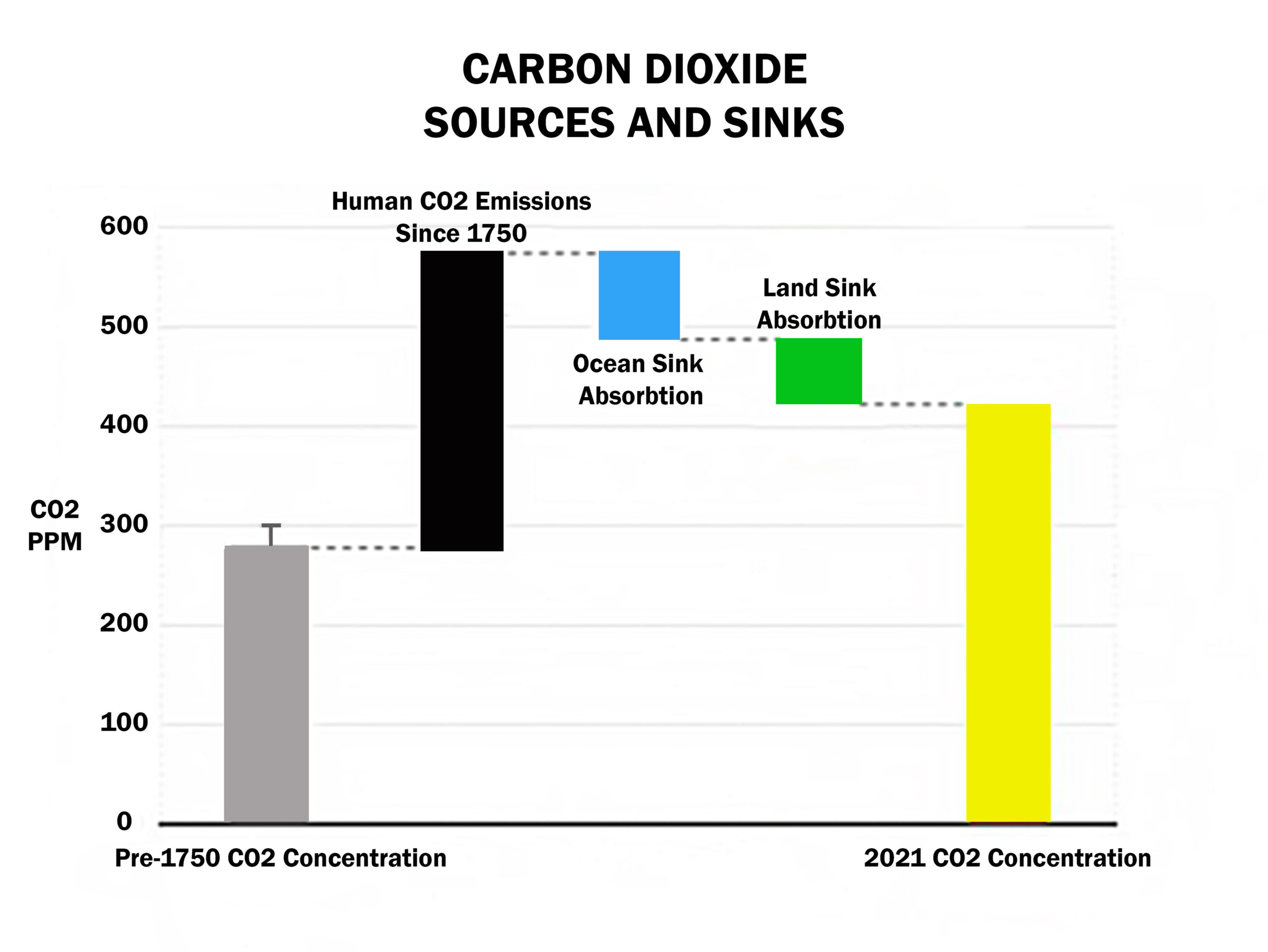 Based on a graph by Robert Scribbler

Blue Carbon ecosystems store carbon about 40 times faster than terrestrial carbon sinks (see Figure below). Not only do they sequester carbon faster but they store more carbon for longer periods of time. Seagrass meadows, for example, can hold the organic carbon equivalent of over 300,000 tCO2/ km2 for thousands of years while a tropical forest holds about 63,000 tCO2/ km2 for decades or centuries. Because many naturally occurring Blue Carbon ecosystems have been reduced or damaged, they can now be expanded or restored to store more carbon and offset global loss without necessarily competing with other uses. 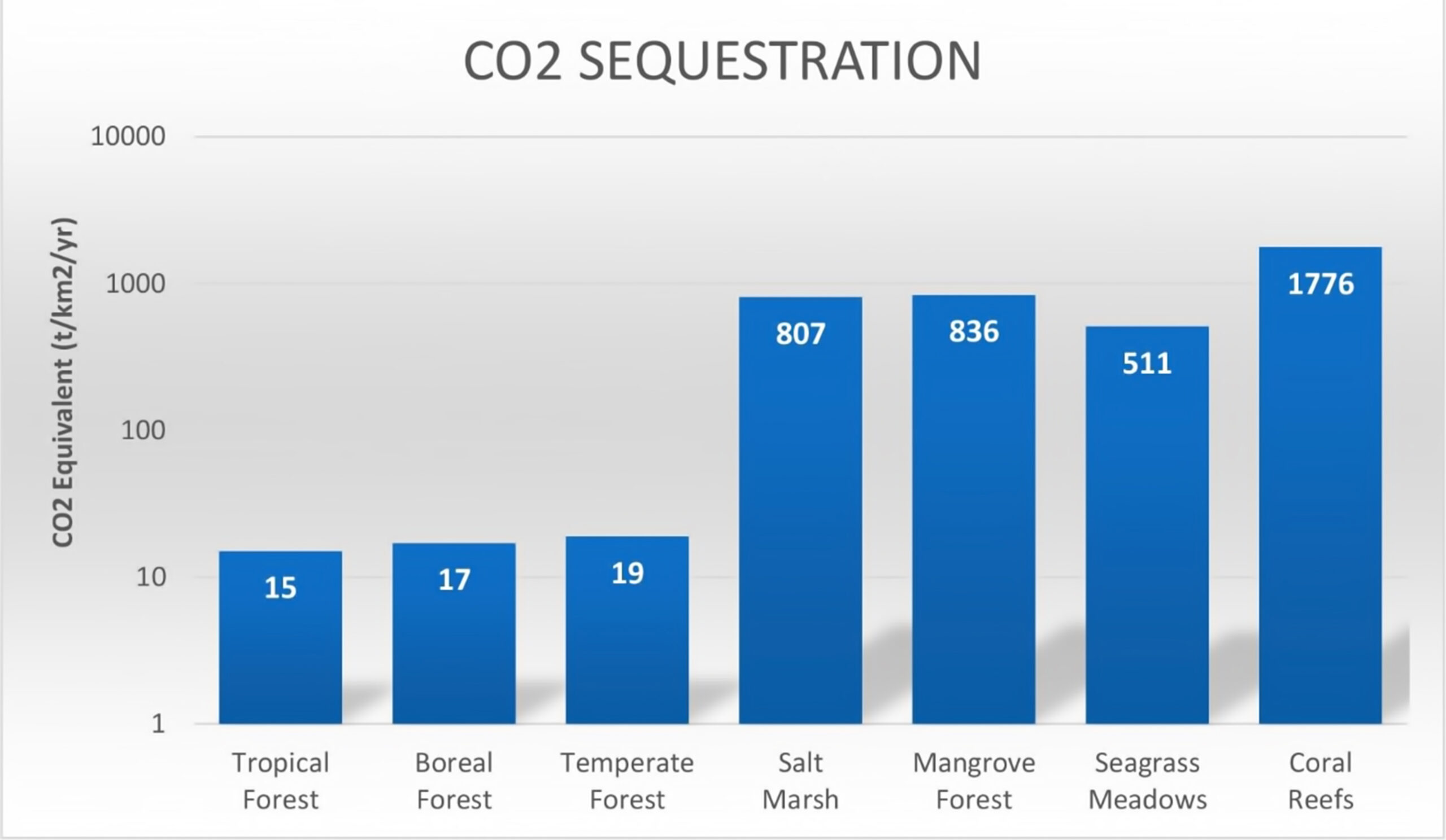 Mean long-term rates of carbon sequestration in CO2-Equivalents(tCO2/km2/yr) in soils in terrestrial forests, sediments in coastal vegetated ecosystems, and coral reefs. Rates do not include carbon liberated through calcification in these marine environments as these vary widely. Note the logarithmic scale of the y axis. Original data converted from: McLeod et al. 2011, Smith and Kinsey, 1976; Buddemeier and Smith, 1988; Kinsey and Hopley, 1991.

Blue Carbon ecosystems occupy only about 0.5% of the ocean’s area and yet they may be responsible for 50% and potentially 70% of all the carbon stored in ocean sediments.For example, seagrass makes up about 0.1% of the area of the ocean, but is responsible for about 14% of total ocean carbon storage. Even today’s shrinking seagrass beds are thought to have stored the equivalent of about 74Gt of CO2.

In addition to conspicuous photosynthesizers like seaweeds and seagrass, corals store carbon through the symbiotic algae that forms as much as 70% of their organic tissue weight, provide their host with oxygen and nutrients, and produce its remarkable colours. Though corals are colonies of animals, from a carbon dioxide perspective, they function more like plants and capture more carbon than they respire.

Unfortunately, natural carbon sinks are vulnerable to damage by man. Replacing mangroves with fish farms can release stored carbon equivalent to as much as 100,000 tCO2/km2. Using the natural loss of Australian seagrass from cyclone damage in Shark Bay, researchers determined that the disturbed seagrass-bearing sediments released as much as 10,000 tCO2/ km2 over just 3 years. Coral reefs too are threatened globally and research suggests calcification is slowing due to heat related stress and ocean acidification (OA). Clearly, protecting Blue Carbon will become more pressing if we are to prevent these sinks from becoming sources.

Our plan is to increase the size of “natural” carbon sinks through large scale Blue Carbon ecosystem construction. With ECO2Reef Systems we create new marine carbon sinks and new sources of food and income for coastal communities. When NEW BIOMASS is created and sustained, then additional carbon is stored for as long as that added “stock” survives. One of our objectives is to develop high-biomass communities where only low-biomass communities exist now. An example would be developing large oyster or coral reefs and associated biomass where only a sandy/muddy bottom exists now. We estimate that ECO2Reef System biomass should be at least 30,000-40,000 t/km2 for coral and seagrass areas (Venier, J.M., 1993) or, in broad terms, 50,000 tonnes CO2 Equivalents per km2. To this, could be added the annual accumulation of CaCO3 through calcification with an estimated average equivalent to 4,400 tCO2/km2/yr. The calcification that stores the CO2 as limestone (calcium carbonate rock and shell) returns some CO2 to the water in the process and its long term benefit to climate change is a controversial area in scientific research. Taken as a standalone outcome, limestone formation appears to be of less value as a carbon sink but, when “matched” with adequate photosynthesis, alkalinity is restored and the CO2 is quickly consumed and converted into more biomass.

The following figure models the development of biomass in an ECO2Reef System following its installation. 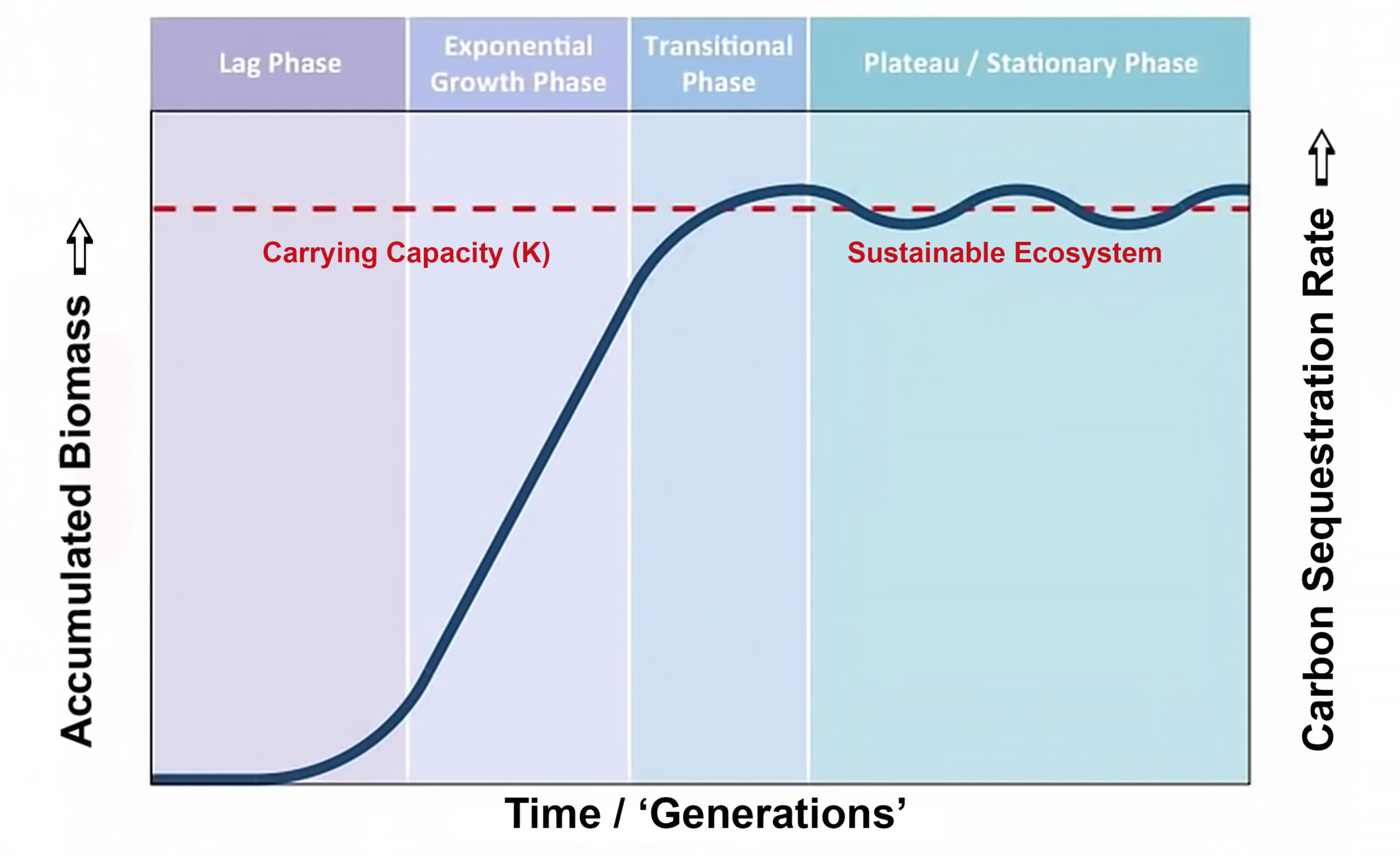 There will be an initial “lag phase” where the community is developing and more species are being added to the food web. As carbon transfer efficiency grows, the community expands exponentially. Eventually, the resources are being consumed as fast as they can be supplied and the community reaches its “plateau or stationary phase” with a sustainable biomass. At this point CO2 Equivalent flow through the system will be as much as 60,000 tCO2/km2/yr. This flow will continue to cycle at a maximum rate, but there will be no further increase in biomass or amount of carbon the system holds; this CO2 is now stored.

Research has shown that higher productivity is achieved when ecosystems are closely ‘linked’ and the transfer of carbon is more efficient. Mumby et.al.(2004) states, “mangroves are unexpectedly important, serving as an intermediate nursery habitat that may increase the survivorship of young fish. Mangroves in the Caribbean strongly influence the community structure of fish on neighboring coral reefs;” increasing the biomass of many commercial species by 40-120%.

ECO2Reef Systems attempt to optimize those natural processes that create the ocean carbon cycle so that a greater amount of CO2 can be removed from the environment. What must be targeted is the export of carbon, in its various forms, from each separate community. Without connected environments, most exported organic carbon normally decays through bacterial action (microscopic decomposers), is re-mineralized to respired CO2 and returns to the atmosphere without benefit of sequestration. This is shown in the figure below as arrows flowing (down) and measured as “Export of CO2” in tonnes/km2/yr. Without ecosystem linkage, we can look at exported CO2 as lost opportunities for these ecosystems to sequester more carbon. With ecosystem linkages, most of this carbon will “feed into” the next environment and be converted to biomass or sequestered for hundreds or thousands of years. By building closely linked communities of consumers, much of the “lost” exports from one community can be “intercepted” and added to long-term sequestered carbon in another. 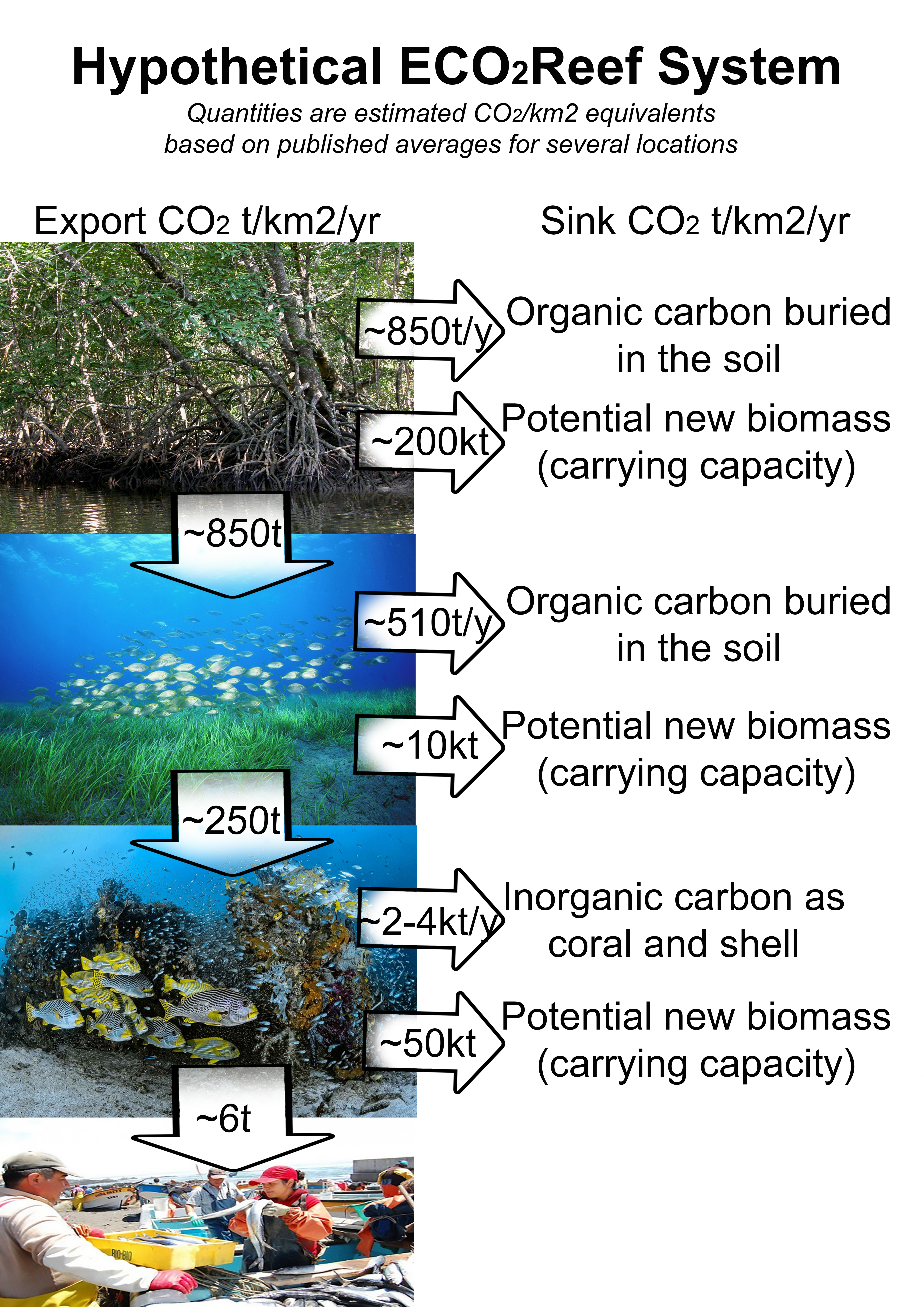 The arrows flowing into the “sink column” (right side) show the potential flow of CO2 Equivalents into long term storage in tonnes/km2/yr and into the potential increase in the standing stock of biomass as tonnes/km2. In a hypothetical situation, sustainable ECO2Reef Systems could sequester from 3,000- 4,000 tCO2/km2/yr (right hand total) and, for new communities, increase total biomass from 20,000-200,000 tCO2/km2. In the process, the availability of sustainably produced seafood close to shore is increased, improving the nutritional value of the local diet,  reducing the need for more energy-intensive fishing practises further offshore and possibly even reducing the carbon footprint of an average diet by replacing meat. Because marine ecosystems vary by several orders of magnitude at different locations, the amounts shown in the figure are based on selected published data or global averages to illustrate the system’s relationships. Coral reefs are a case in point where calculations are problematic; calcification rate varies by a factor of >10 and CO2 release by a factor of >100 ranging from small sources to important sinks.

Not all natural systems function at optimum levels and natural biomass production is failing in the face of a growing world population and increasing consumption of seafood per capita. ECO2Reef System engineering is not about putting the world back to the way it was; it’s about protecting and enhancing natural processes to meet the demands that are a necessary part of our future. It’s about addressing the climate and biodiversity emergencies while also meeting the United Nations Sustainability Goals of No Poverty, Zero Hunger and Reduced Inequalities.