Fizzy Transition Ventures runs an experimental Coral nursery at Perhentian Kecil, Malaysia to grow new corals for the restoration of damaged coral reef. This is where we also test our improved artificial reef materials. Operated in conjunction with the Department of Marine Parks Malaysia and supported by the Alunan Resort and Universal Divers it is designed as an important large scale Coral Reef Rescue Project.

Perhentian Coral Nursery - What we learned so far

The Perhentian Coral Nursery was established in 2018 by Fizzy Transition Ventures and receives support from Alunan Resort. Originally, the Perhentian Coral Reef Rescue Project was started as a response to a situation in which large tracts of coral reefs had been destroyed by dynamite fishing (see photo below). Resort owners had seen Fizzy’s tsunami restoration work at Datai Bay and asked if we could assist with Perhentian’s failing corals. This led to the design of our Experimental Coral Nursery and the development of Coral Stars for restoring unstable substrate. 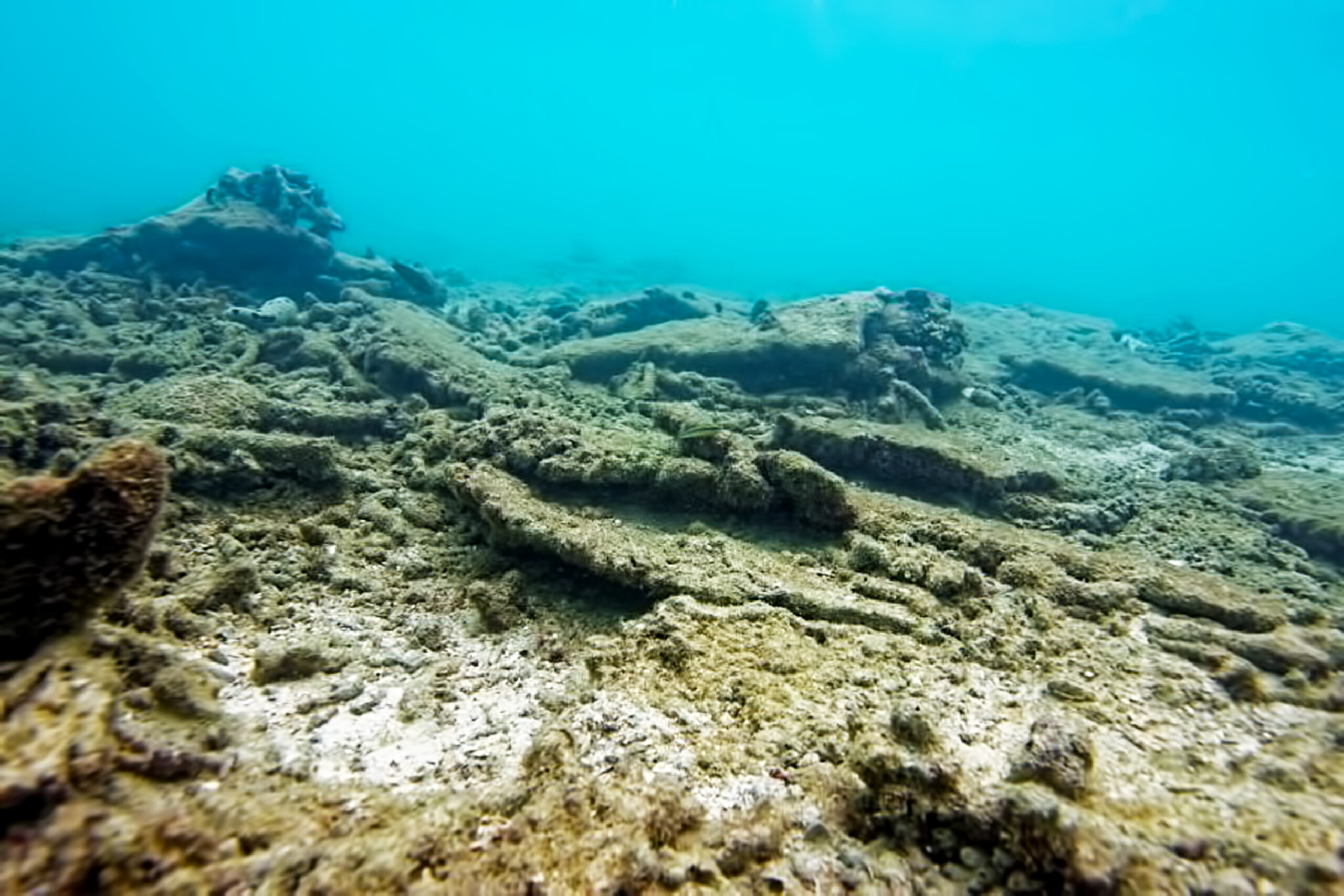 In 2019, Fizzy Transition Ventures carried out limited surveys of seven reefs within the Marine Park during a significant coral bleaching event from March through August. Unusually high temperatures affected about 25% of large coral colonies to depths of about 12m in all of the areas surveyed. Recovery was slow for most corals and about half of the corals effected died and were overgrown by algae. Like many other reefs, Perhentian Marine Park is subject to a range of environmental stressors including high nutrient levels and overfishing. 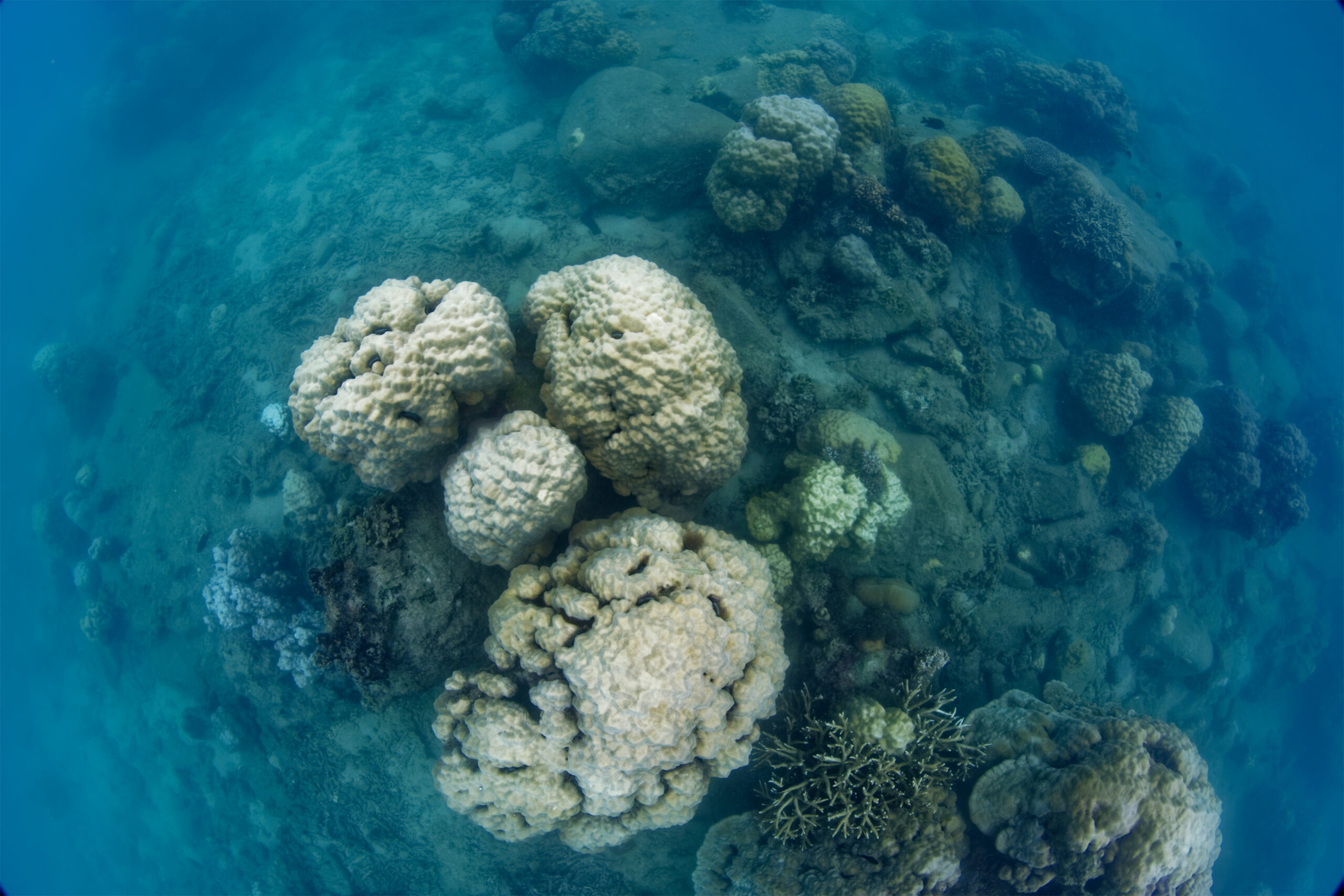 These massive Porites corals are “bleached” white after losing their symbiotic algae. Small light patches in the upper left are more bleached corals. More temperature- tolerant corals can be seen in this photo with darker brown and green colors.

Bleaching is poorly understood but coincides with high levels of physiological stress leading to a ‘tipping point’ that causes corals to eject their zooxanthellae, lose their photosynthetic ability, and eventually starve to death. The loss of the colorful zooxanthellae leaves the transparent veneer of still-living polyps sitting on their white skeleton and producing a “bleached” appearance.

The relationship between zooxanthellae and coral polyps is symbiotic and critical to the polyp’s survival. The waste products of the coral’s metabolism are used by millions of microscopic algae cells, known as zooxanthellae, that live within the coral’s tissue. In turn, the coral uses the plant carbohydrates and oxygen that “leak” from the algae to supply about 90% of their food intake and assist with coral skeleton production. If the stressors are removed before the coral dies, the algae can be regrown and the coral will survive.

How our Nursery fared and what we have learned

In our experimental nursery, 2019 growth rates were slower than anticipated due to the high water temperatures from March through August. This photo (below) shows the same coral colony (from slightly different perspectives) over a period of 20 months. Growth during 2018 was much more dramatic and was unaffected by water temperature.

In 20219, some Nursery corals experienced “paling” (the partial loss of zooxanthellae), but did not bleach as much as naturally occurring corals as little as 50m away. Paling was judged using color card “estimators” (see photo). 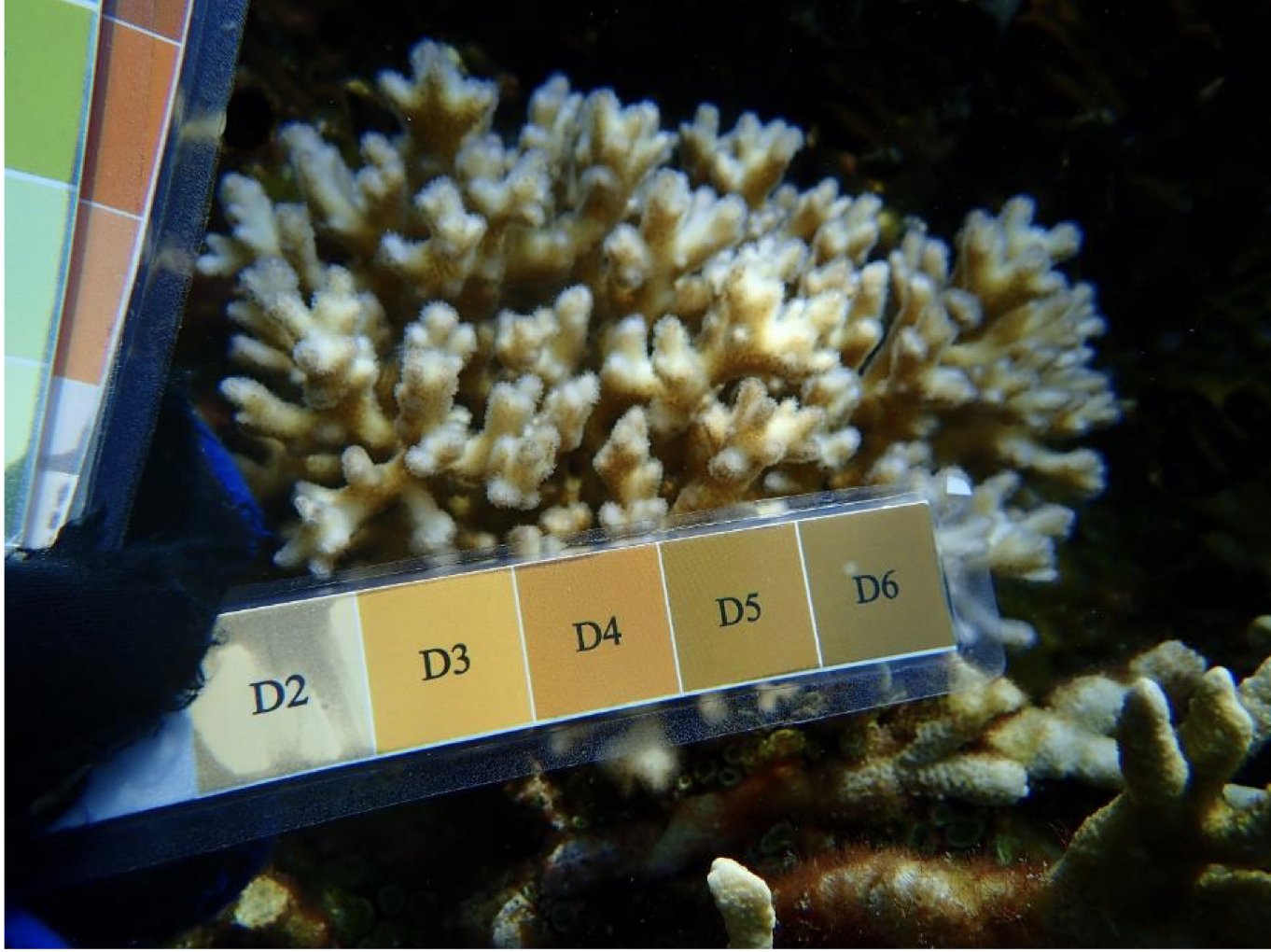 It was found that “paling” variability was very high, even in colonies growing next to each other, suggesting small genetic differences in either corals or their zooxanthellae. These are the naturally occurring differences recently referred to in the media as “super corals”.

We began researching surface coatings in Great Barrier Reef waters when we found that many corals would not grow on Portland cement based artificial reefs. Over the years, experimentation has led to a successful surface treatment that gets coral fragments started faster. ‘Compound 7’ has now been tested in the Andaman Sea and the Coral Triangle where it has proven to be of real advantage in both transplanting and natural settlement of corals. The “faster start” occurs when newly developing coral tissue actually “reaches down” toward the 'Compound 7' and forms heavily calcified bases that are able to immobilize the fragment against water movements within weeks (see photo). This greatly reduces abrasion, tissue loss, and subsequent infection. 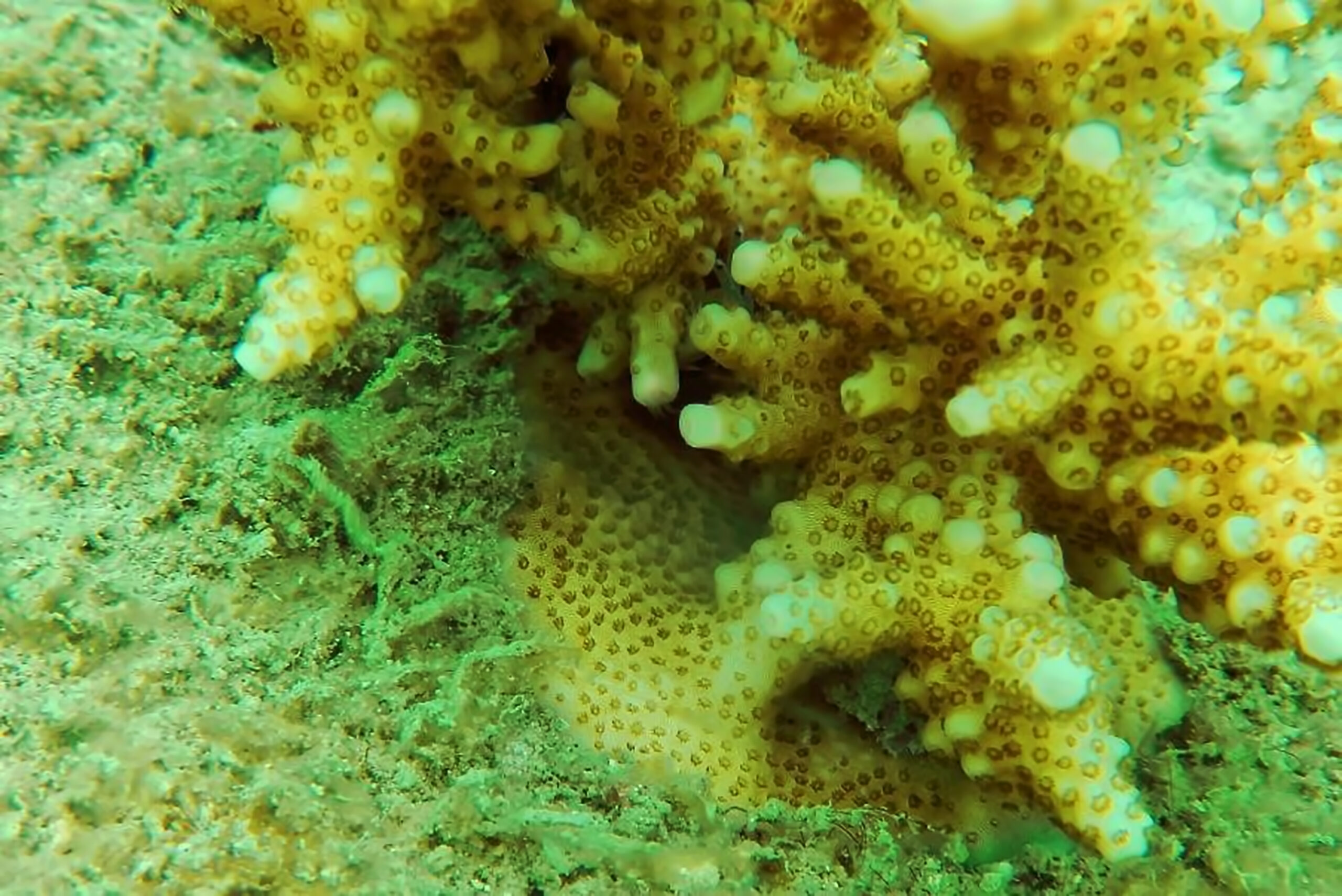 Our Nursery Technician describes the process this way: “It looks like the coral is melting as lumps of tissue grow down and spread across the substrate. It happens in just a few weeks.”

Natural settlement experiments looking at wild coral planulae on treated and untreated surfaces continue. Tiles were placed on the seabed for the 2019-20 spawning. Since that time, tiles treated with ‘Compound 7’ are growing 63 colonies per square meter while the untreated tiles have only recently been colonized by a single coral.

During 2020, Fizzy Transition Ventures began preparation for moving the first coral transplants from the Nursery to Coral Stars. Unfortunately, Covid-19 resulted in closure of the resort and transport to and from the island. 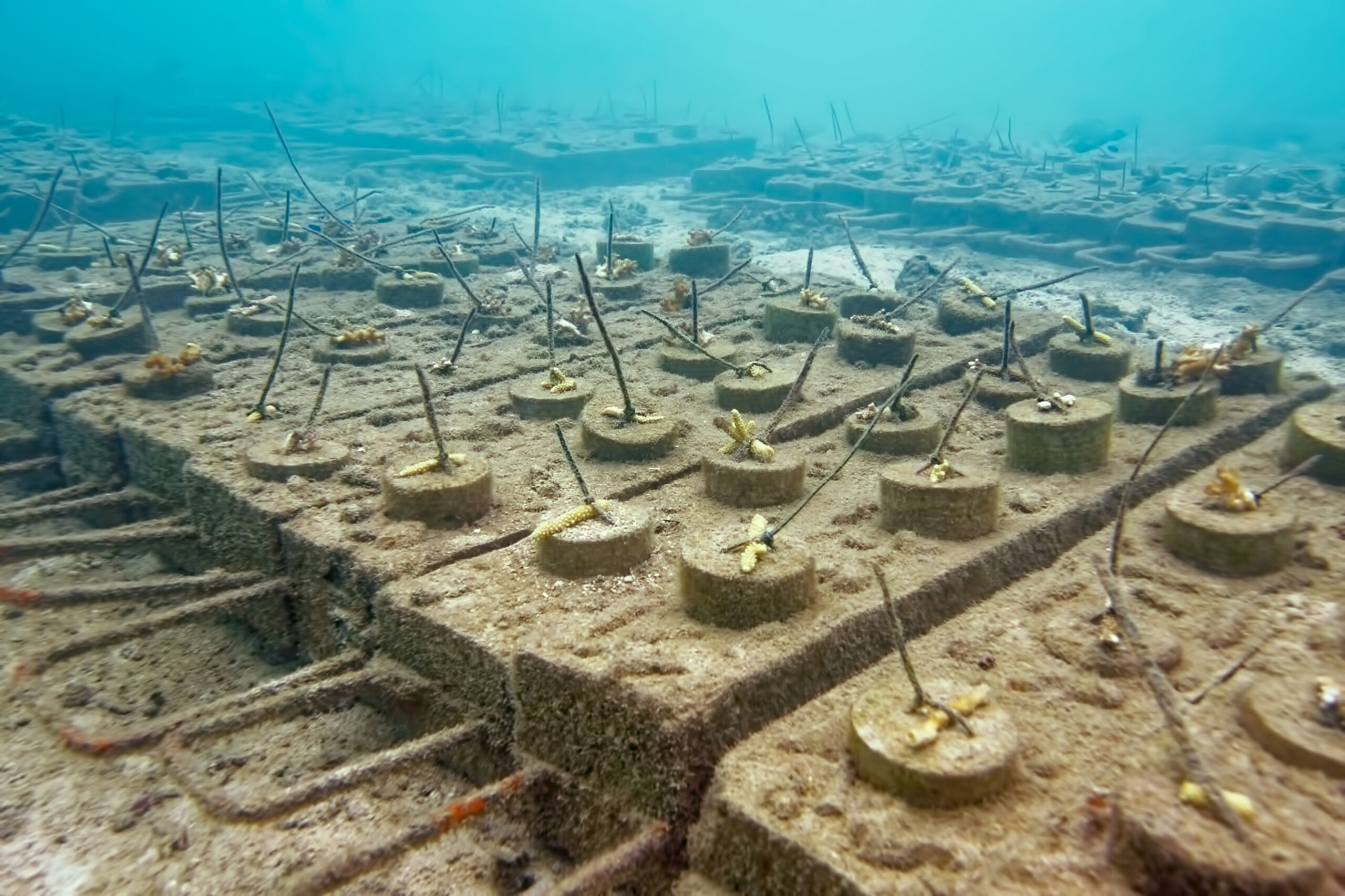 Our target for 2021 was to begin the deployment of 'Coral Stars' in the vicinity of the Coral Nursery and resort. We have about 250 'Coral Star' “arms” designed for row and column layout. These concrete pieces each hold five coral transplants. They are designed to be easily moved by our dive team into shallower water for gradual acclimation to higher light levels and greater water movement (see photo above).

Transplant mortality varies greatly in reef restoration. Fizzy’s coral mortality rates are relatively low (compared to other technologies) at about 10% per year for Nursery reared stock. This seems to be due in large part to the use of 'Compound 7' as a transplant “starter” allowing for quick attachment of very small fragments, providing antibiotic assistance, and potentially improving coral calcification rates. It will be interesting to see how are young transplants have fared while awaiting reopening of the Nursery.

Refinement of this experimental program should lead to upscaling. Production of corals at the Experimental Nursery can easily be expanded to 10,000-20,000 colonies per year. For the Perhentian Marine Park, this could equate to rehabilitating an area of about 4,000 square metres per year with current facilities.

Fizzy Transition Ventures are establishing an additional cooperative research program with Wageningen University in The Netherlands. They are developing bio-glues to hold coral transplants in place replacing the plastic cable ties used now and these can be tested in the Perhentian Nursery. They have assisted us in successfully testing ‘Compound 7' in a Dutch oyster hatchery and we hope to be able to move this along to Caribbean coral settlement research in 2022.